We called in at Austria’s equivalent of B&Q as we needed to replenish our gas bottle. Having checked every inch of the shop (which was massive), we were forced to ask the shop assistants for directions. Apparently DIY stores don’t form part of German GCSE vocab, but Alice managed to get her point across and we ended up at the checkout where a lady then had to phone somebody to bring the gas to us.
After this little diversion, we had a short drive north to the Czech Republic where a somewhat unusual campsite awaited us. It was little more than an overgrown field containing large frames that supported giant solar panels, with space for tents and motorhomes underneath. Bizarre setting aside, the campsite was only a short cycle away from the town of Český Krumlov. Nestled on the inside of a meandering river bend, Český Krumlov’s old town was protected from the highly functional Soviet buildings which appear in many Eastern European towns, leaving a charming, characterful town which is clearly a tourist magnet. Our arrival coincided with another scorching hot day, so we grabbed an ice cream before visiting the beautiful church. We then went to the castle, which dominates the skyline, visiting the museum before climbing the narrow rickety steps of the tower for an aerial view of the town. By late afternoon, the coach parties had departed so we settled down to enjoy a nice Czech beer or three by the river. 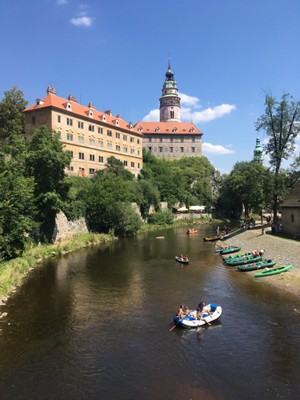 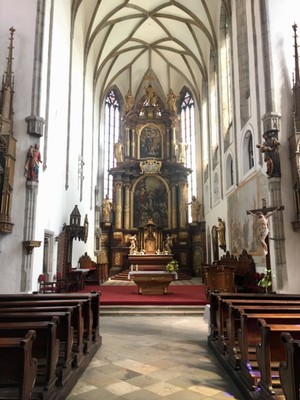 Looking down on Český Krumlov 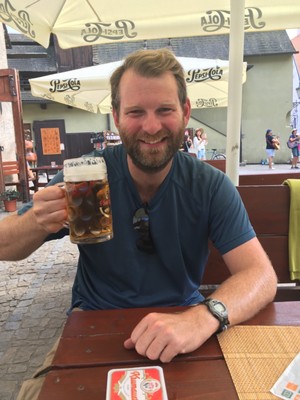 The city of Olomouc in the east of the Czech Republic was our next destination. After negotiating some rural roads, a stretch of very bumpy “motorway” and eventually finding a petrol station that would take a credit card, we arrived at the scrap of wasteland that apparently doubles as the city’s campsite. It was mid-afternoon and 36 degrees and we were in no mood for traipsing round a city, so we jumped straight back into Gav and carried on driving. We soon realised that we were going to end up in Slovakia so we hastily visited a supermarket to spend up all of our Czech currency. Food was quite cheap, so we were forced to buy gin. We decided that we wouldn’t stop driving until the temperature fell below 30 degrees which finally happened at seven o’clock and so we stopped at a small campsite in the middle of nowhere.
Having driven so far the day before, we only had a short drive to the High Tatras, a range of mountains which runs along Slovakia’s northern border. We dropped in on the town of Poprad for a coffee and to visit the tourist information office before finding a busy, but pleasant, campsite in the village of Stará Lesná. It even had its own bar with beer at €1.30 a pint! 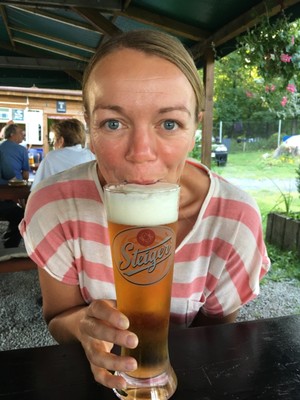 The next day we got up early and caught the 7am bus a few kilometres down the road to the start of a walking track. It was a Saturday and so there were quite a few people there but we marched off up the track and soon left the crowds behind. We climbed steadily through the trees to a mountain hut by a pretty lake. There were about thirty people there when we arrived who had clearly stayed at the hut overnight. Some of them were even tucking into a cheeky beer despite it not yet being 9am. From the hut, the path rose more steeply, above the treeline and up to a summit at 2000m where we had spectacular views of the surrounding peaks, back down to the lake and out across the plains below. We could also see large numbers of people making the short climb up from a cable car station on the other side of the mountain. Said cable car station was our ultimate destination and we arrived in time for lunch in the sunshine before the twenty minute cable car ride back down to the foot of the mountain. 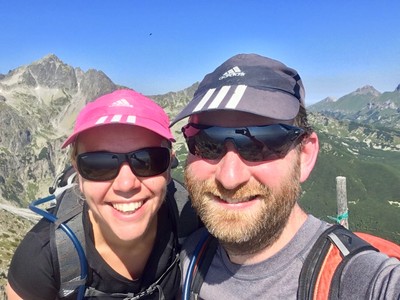 Being in the mountains means changeable weather and the next day brought much thunder and lightening. Lots of lunatics on our campsite ventured out anyway, but we decided that a day of DVDs was in order.
Fortunately the storms had passed by the following morning and so, after a bit of a false start caused by our inability to read the Slovakian bus timetable, we tackled another mountain walk, this time a circuit from the top of a funicular railway. Whilst the clouds swirled around us for much of the day, the rain held off which was a good job as the steep mountain passes would’ve been tricky in the wet. 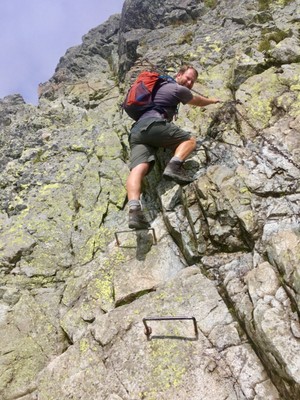 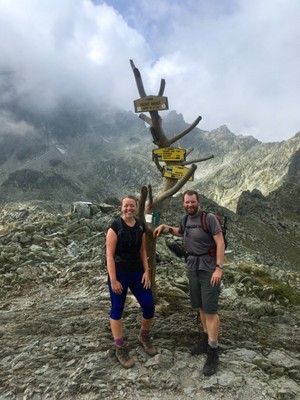 Our final day in the Tatras was another hot one. We’d earmarked a big climb to do and, judging by the car park at the start, the rest of Slovakia had chosen the same walk. The peak in question, Rysy, is right on the border. In fact, the summit is actually the highest point in Poland. The path was narrow and rocky and the popularity of the walk amongst people of all abilities meant that there were a few points which caused a bit of a bottleneck, but the views from the top were well worth our efforts. 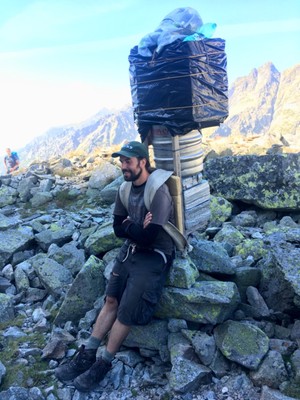 The view into Poland 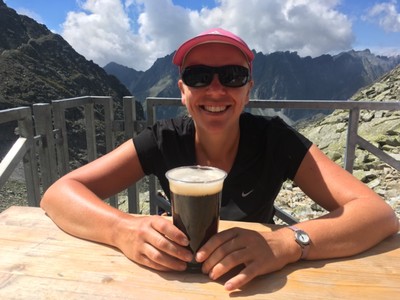 Less than an hour’s drive south, in fact still in view of the mountains, is Slovenský Raj National Park which is famous for its gorges. The park’s campsite is perfectly located, right at the entrance to one of the gorges so we were able to plan a circuit that started straight from where we slept. The gorges are pretty steep in places so they’ve installed a load of ladders, chains and staples that they’ve bolted to the rocks with varying degrees of reliability. It was a really fun place to walk and something completely different from the Tatras. That evening we sampled some Slovakian food in a bar by the campsite. We ate Bryndzové Halušky, a dish of dumplings coated in sheep’s cheese and topped with bacon. It was delicious! 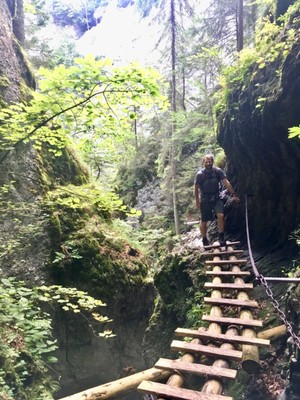 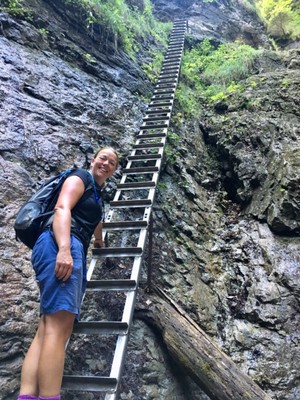 Hopefully this is securely bolted down 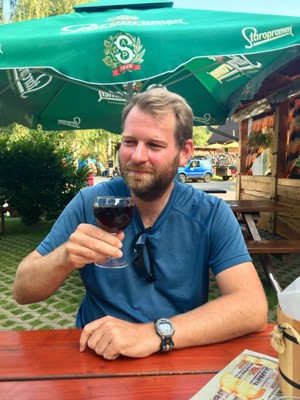 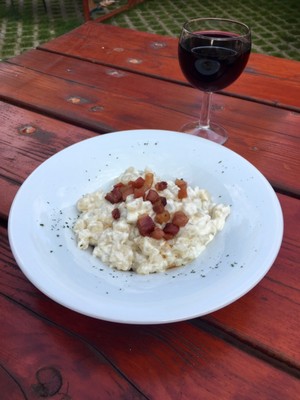 Our final morning in Slovakia was spent visiting Spiš castle, a set of hilltop ruins that are visible for miles around. On the way there we called into the quaint walled town of Levoča for breakfast. We wanted to try a Slovakian sausage, Klobasa, and it was our last opportunity to do so before leaving the country. 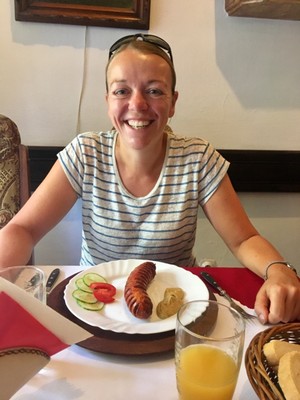 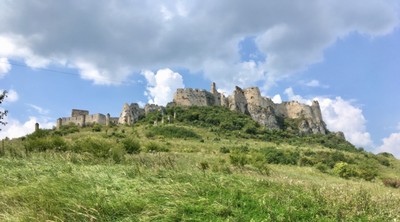 Posted by aliceandguy 10:56 Archived in Slovakia

Previous Next Table of contents

Comments on this blog entry are now closed to non-Travellerspoint members. You can still leave a comment if you are a member of Travellerspoint.

If you aren't a member of Travellerspoint yet, you can join for free.